With Innies and Outies, we were looking out for single cells poking into a block or protruding outwards. We said that a block can be any combination of adjacent units (as long as they don’t overlap, like a row and a column). Sometimes, there just won’t be a single cell in one cage. 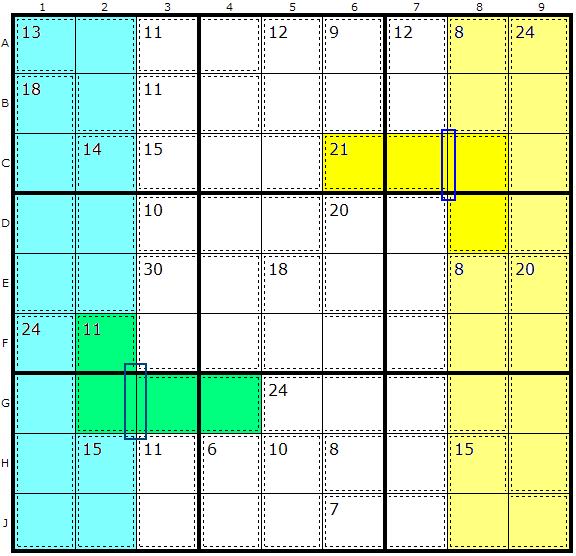 In this example, which is the "Tough" example on the Killer Solver, we have two cage splitting examples. A side note: because the cage pattern is symmetrical you should be able to find and use this strategy twice. Not all Killer puzzles are symmetrical, however, but it is worth looking out for.

Cage Splitting doesn’t often get us whole solutions, but together with combinations (our first strategy), it can dramatically reduce the possibilities in cells. Cage Splitting can leave behind an innie or an outie elsewhere in another direction, which is also useful.

In trying to understand an idea kindly emailed to me I got a different brain wave altogether looking at the same puzzle. Cage Splitting, as described above, works by finding one cage that is half in and half out of a block. This limits the chances of finding an instance because either quite a few cages need to be lined up or many cells need to be solved. What if there were a way to expand the number of Cage Splits?

(Keyword: A Locked Set is and group of N cells that contain N number of different candidates. They must all 'see' each other as well. A solved cell is the simplest locked set as N=1.)

Consider row D in this puzzle. It doesn't look an especially worthwhile 'block' that might split in one place. We have a 7 in D5 which is nice, plus a 1 in D6. The 1 in C4 means we can calculate the value of D3/D4 (cyan box, which is 13 - 1, or 12). Now what about the last cage in the row? We have a 2 in D9 but the fascinating fact about this cage is the Naked Pair in D7 and D8. This is also a Locked Set just like any solved cell.

Because 4 and 5 are the only two values left for these two cells, we know they must sum to 9 - even though we don't know which way round they will be (but that's not important now). We can mentally split 5-cell cage with a value of 27 and know with certainty that the 'innie' cells contribute 11 to row D. So we can split the block in the first cage after all!

Using Locked Sets in this manner is extremely useful for Innies and Outies as well.
If the solver finds an example it will add this as an info alert:
(*note: the cage that includes C7 has been split to include it in the rows)

Laurence Goldman - the two yellow columns must add up to 90, when the two "outie cage" cells are included.

Every column must have one instance of 1 through 9 each, they add to 45. So two columns add up to 90. The other cages add up to 75, the two remaining cells must contain 15.

In Using Locked Sets to Split Cages, cells c:4&5 and f4&5 each show candidates which form a deadly pattern.

Andrew's first site sudoku.org.uk has his old generators ALL the killers there are symmetrical ...

--------------
Kappa Puzzles
has several sudoku variants
one is sumoku which i jumped into with both feet to find out the answers werent coming out at all. turns out its not sudoku but killer roman squares of that 9x9 variety. and in a sudoku magazine.

Good to see real expertise on display. Your cotnrbiution is most welcome.
Andrew Stuart writes:
Thank-you!
Article created on 13-April-2008. Views: 82666
This page was last modified on 15-January-2014.
All text is copyright and for personal use only but may be reproduced with the permission of the author.
Copyright Andrew Stuart @ Syndicated Puzzles, 2007-2023