This is an important Killer Sudoku strategy which I have placed at the start of all the more complex strategies in the solver because it is so useful and very easy to spot. It is related to Intersection Removal. Whereas IR is the overlap of rows/columns with boxes, this is the overlap of 'cages' with rows, columns and boxes.

Each 'cage' is made up of one or more 'combinations' - sets of numbers that total the cage clue. If you can find a candidate number inside that cage that is not found elsewhere on the row, columns or box the cage is aligned on, then you know that number must appear in the cage. That part is self-evident since, in the solver at least, these numbers are displayed. Given that number is true, we can remove all combinations which omit that number. Often that means we can remove a bunch of numbers.
Example 1 (Link)
In the first example below, two such Cage/Unit Overlaps occur. The 2-cell cage with the red box has a clue of 14, which means the two combinations (visible if you hover over the cage on the solver) are {5,9} and {6,8}. The 6s in the cage are unique to that cage and the cage is entirely inside the box. So the only combination that fits is {6,8}. Hence we can remove 5s and 9s from the cage. In fact, since {6,8} is the only combination left both those numbers must fit in the cell and ALL other candidates can be removed, so the 4s and 3s can also go.

The blue ringed cage, a 3-cell with a clue of 19 gives us five different combinations. But the 9 in that cage is unique to both the cage and row H, so only the combinations with 9 in them are valid. {4,7,8} and {5,6,8} are not possible. Of the remaining candidates, the 5s can be removed.
Example 2 (Link)

In this second example, five Cage/Unit Overlaps have been found. Taking just the centre one as an example, the red ringed 4-cell cage has a clue of 28 - the combinations being {4,7,8,9} and {5,6,8,9}. 7 is, however, unique to the cage and the centre box, so only the first combination can be valid. 5s, 6s and other numbers not in that combination (the 1s) can be removed. I'll leave it to you to show how the other four cages have similar eliminations. Overall, most Killer Sudoku puzzles will have at least one example of this strategy so they are well worth looking out for, and often you can reduce the puzzle with this method while looking into the cages with multiple combinations. Keep an eye out on the rows, columns and boxes you are studying.

If Type 1 above is related to Box Line Reduction, then you'd recognize that Type 2 will look like Pointing Pairs, it's opposite. Credit to Caleb Andrews for finding this example and stating the logic so elegantly. 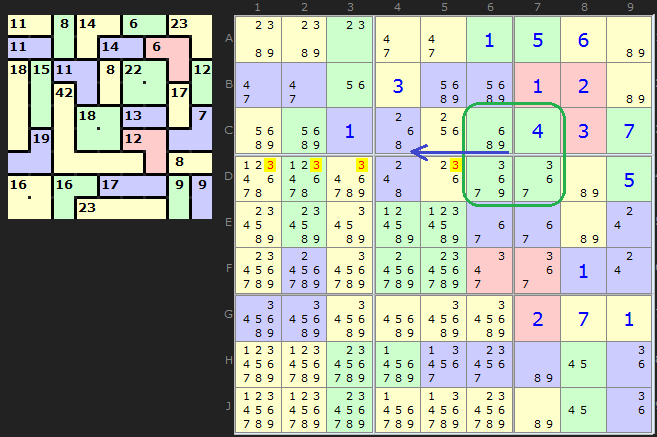 There is another large example of this strategy in the same puzzle, on the big L cage starting on D3.

Bi-Value attack on a cage

Another type of elimination I've chosen, a bit arbitrarily, to insert into the search at this strategy point is to compare a cage with a bi-value cell. This was a tip from Ivar Ling. 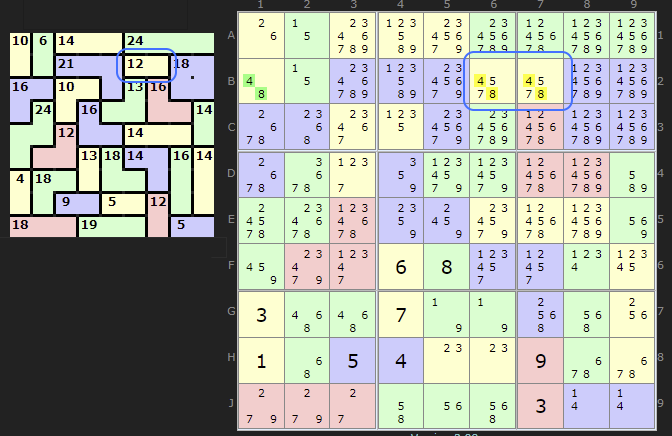 In this puzzle the 2-cage with a sum of 12 can only be {4/8} or {5/7} (with {3/9} already removed). Now a bi-value cell B1 can see all the cells in this cage and it contains a pair of candidates which matches one of those combinations. Since B1 must be either 4 or 8 it removes {4/8} combination from the cage. This will be reported as

It is easy to imagine a Triple on two cells effecting a 3-cage as well, but the solver does not currently look for this.

In the blue box of first example 6 and 8 can also be removed.
Article created on 22-March-2011. Views: 54323
This page was last modified on 23-July-2021.
All text is copyright and for personal use only but may be reproduced with the permission of the author.
Copyright Andrew Stuart @ Syndicated Puzzles, 2007-2023