I'm going to refer to Block as any set of adjacent rows, columns and boxes we can use in concert, but also a block could be just one row, column or box. Innies and Outies occur naturally because cages often line up with the Sudoku elements but in the middle and end game you can split the cages that contain solutions and create new useful blocks that were not available at the start. 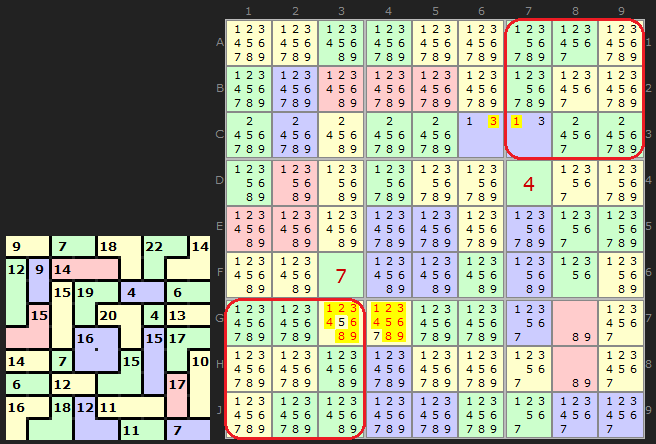 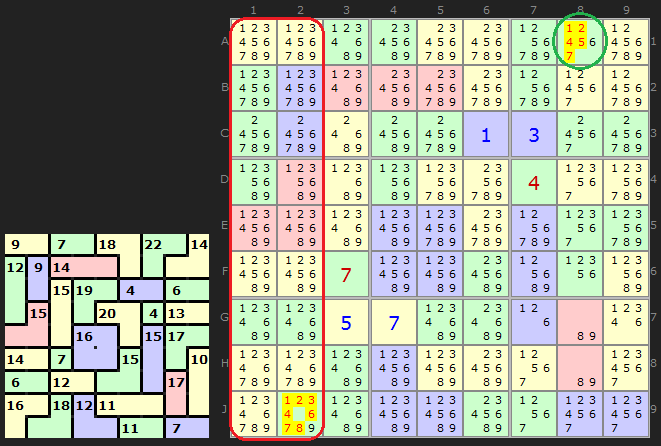 [As of 9th Dec 2014] the solver can complete this Killer. You can Load it here and see the example. 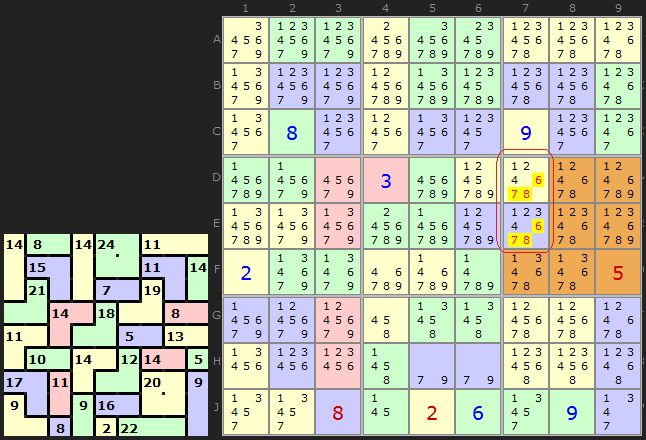 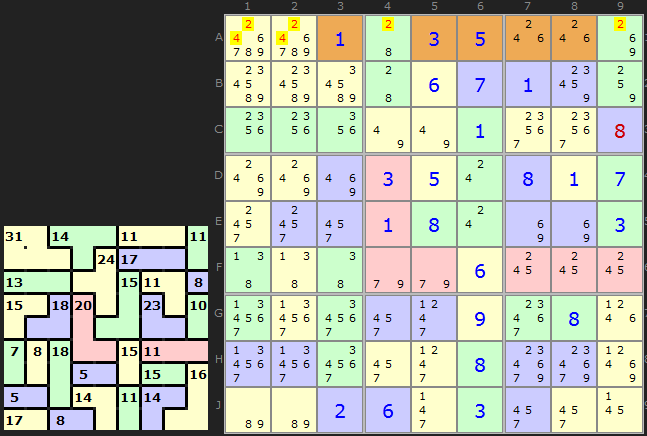 The solver fails to find the 3 cell outie in E2,F2,G2 adding to 68-45=23 and the rest is straightforward.
Andrew Stuart writes:
True!

The solver fails on this board. However, it can be easily solved using an extension of the concept of pseudo-cages.

It seems to me that this method is much easier for a pencil-and-paper solver than the exotic computer oriented strategies used by the solver.

I've come to look for help on the "Killer Innies (2+ cells)" with no explanation as well to no avail. I have a puzzle that the solver is eliminating candidates from and after struggling with it for an unreasonable amount of time, I still can't get it.
Andrew Stuart writes:
That would be the discussion under "The Pseudo-Cage - multi-cell Innies" above

Sometimes the killer solver says
"Killer Innies (2+ cells)"
with no elaboration and no brown emphasis on cells affected.

I cannot figure out the result.
Andrew Stuart writes:
Okay sounds like a bug!

I get to 28 clues solved, and the next step is an "Innies/Outies (2-step)". It suggests some to remove, but it gives no details at all in the details box. I can see why one removal makes sense, but not the others. Perhaps there's a bug at this step?
Andrew Stuart writes:
For me it reports:
Killer Innies (2+ cells)
INNIE/OUTIE: A block that must sum to 45 leaves 18 to fit in 3 cells belonging to cages not entirely within the block. Given the available combinations...
- we can remove 5/7 from C1 (only 2/6 is possible)

There are lots of kinds of peudo-cages.

This board has a 2-cell innie in d5,f5 summing to 12. This creates a 2-cell pseudo-cage in c5,g5 summing to 9+11-12=8. Thus there can be no 4 in c5 or g5 and the solution is straightforward. The solver seems to require the distasteful use of Bowman Bingo.

In addition to pseudo cages, it is sometimes also useful to consider the case of innies and outies together. As an example take the case that a box has one innie and one outie. It is easily seen that they form a sort of cage, except that not their sum, but their difference can be calculated. This sometimes helps a lot to reduce the number of candidates.

The kenken solver does not solve this puzzle properly: There is a 6x6 KenKen puzzle I would like you to look at
Click on this link

so thats the ez stuff moderate in about an hour

I'm sorry, but alas! this 'only' is not a solution, it gets stuck again a little later "run out of valid strategies"

No doubt, you have improved the solver, but in my opinion it still lacks a routinary and effective way of detecting which squares are the same value in order to inmediately eliminate single candidates.

Andrew Stuart writes:
I understood your trick but dont have a way of generalising it yet. I agree my enhancement doesn’t solve this puzzle but it's very useful over many puzzles. Still working on your strategy. I'll post more when I get there!
Thanks

I have always found your site extremely useful for difficult problems. However I cannot understand the "bolder 4 cell pseudo cage" in your killer solver. The example shown says that 2 cages are completely within the row and add up to 25. I can only see 1 cage which adds to 11.Am I missing the point here?

the solver spotted all those

box1 has a dual outie of 2
i noticed that before the singles but,
the solver never did spot it .. solver found the 1 to the south with some magic multiple cage interactions and exotic hard cage combinations

after it found the 1 to the east in the 7(2) cage,
it took several solve steps before it discovered the 6
I dont consider that particular combination to be a tough one ...

order of the steps the way i solve vs the solver

perhaps move the blue ones (killer specific) to lower numbers

I like killers, and this was a fun analrettive. I completed it in a few minutes. Since only the 10 value was added, I made that the single-digit Roman Numeral X to avoid writing in 2 values per square.And speaking of double-digit values, I finally bit the bullet and bought your Sudoku Pro puzzle book. I had trouble in the past justifying not completing the 8 or so pages of 16 16 and 25 25 sudokus that I don't like (OCD that I am). However, I get much enjoyment from the puzzles here and puzzlemix that I'll throw some support your way. Cheers.

just look at the lack of the killer cage convention

So the concept of Innies and Outies is this: since any given row, column, or box of nine squares contains the digits 1-9, it must add up to 45 (1+2+3+...+9=45). Therefore, if you have a given set of cells that overlap said row/column/box, plus an extra square (an outie) or minus a square (an innie), you can calculate the value of that square.

It would work the same way for an Outie, except that the total sum of the cells would be greater than 45 and the empty square would be on a different row. (Example: total sum is 48. 48-45=3, so the 3 goes in the Outie square.)

Then you just expand this for multiple rows/columns/boxes. If the sum of one row is 45, then the sum of two rows is 90, the sum of three rows is 135, and so on.

I hope that this helps to clarify. I know that it's hard to visualize when I don't have proper pictures like above.

I didn't know where to find this info then kaboom it was here.
Article created on 13-April-2008. Views: 100636
This page was last modified on 15-January-2014.
All text is copyright and for personal use only but may be reproduced with the permission of the author.
Copyright Andrew Stuart @ Syndicated Puzzles, 2007-2023